It was an old dream come true. Somehow I became interested in the Icelandic goat race in the 1980's. I made a feeble attempt to getting introduced to goat keepers in Iceland but it ventured to nothing. Then in 2010 after having spent a couple of hours with an old friend from college I got going again. I visited the farm at. Háafell in W-Iceland where the biggest goat heard in Iceland lives (then about 150 goats) . I asked if I could help Jóhanna the farmer with the combing of the goats.
The combing started in April when the first goats begin shedding their down. I used combs meant for big furry dogs that I bought from a pet shop and Jóhanna used her comb that was meant for goats.  As Jóhanna combed faster than I did with her T shaped comb I ordered so called Perth combs from England.  They made the difference and the combing was easier.

Then it was the question of how to handle the raw fleece from the goats. We kept each fleece separate in a corn starch bag and labelled the bag with the goats name.  I weighed every fleece separately. Then I wanted to spin it. That was when the hard part started. I knew I had to dehair the fleece i.e. take the guardhair away. But how? After many searches on the internet and sending loads of emails to people I ended up with dehairing by hand and only about 10-15 g of each goat that left me with a spun thread of about 6g. It took about 12 hours to manufacture each 6g.  And it took a load of audio books keeping me company.

I took samples of fleece from about 40 goats and sent it to The Fibre Lab in Scotland to have the hairs measured. The down, or cashmere is finer than 18 µ but the length was too often less than 40 mm. The ideal length is 45-50 mm. The Icelandic cashmere is not first class quality, but could become so with careful breeding.
The next step in my project is to send a few kg of fleece to a mill abroad that will wash, dehair, card and then spin the cashmere.  This will probably happen in January or February. I need to see how the fleeces turn out as tops and yarn from a mill in the condition they are now. If the goats will be bred for cashmere, there will be something to compare with in the future.


In Icelandic the guard hair is called strý and the soft down is called fiða, or geitafiða also kasmír or kasmírull.
This goat has just been combed and is very pleased. She has contributed to the cashmere project.

It takes about half an hour to one hour to comb one goat of the cashmere that it is shedding. It depends on the amount of cashmere it sheds and some goats  do not behave at all, kicking  and bleating all the time.
But most of them enjoy being combed and are most offended when I pick another goat to comb. An offended Goat will be standing behind me and poking me with the cloven hoofs or horns to get attention: "Why are you combing that goat when you could be doing me?" 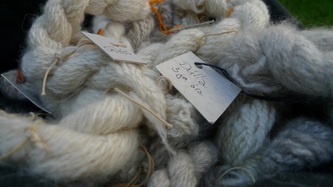 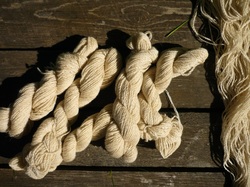 In February 2012 I sent 5 kg of goat fleeces for processing to Telespinn in Norway.  It took them quite a while to process the material as the fleeces are not first class and there were obstacles to pass before they found a way to spin a yarn from the fleeces. However they succeeded and I received the yarn from the post office in the beginning of August 2012. Apart from the fine cashmere yarn they also sent me the course hair that had been dehaired in a machine from the fleece and the last dehairing which was short cahsmere and course hair that had been spun into yarn.


The weight result from the process:

Not so bad because the goats have not been selected for their hair. I will be an optimist in this case.